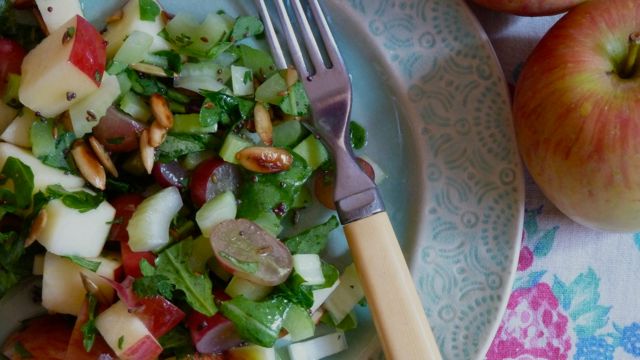 This salad covers all the bases—sweet and salty, crisp and crunchy. Herbal. It’s a perfect throw-together dish when you don’t have much in the fridge beyond the usual—like apples and celery.  Substitute raisins or currants if you don’t have grapes.  Leave out the greens altogether if you like. Or chop up the bright-tasting celery leaves and toss them in (yes, they’re useful beyond being just compost additives or guinea pig fodder). Cubed fennel bulb and their feathery fronds would be a nice addition as well.

Pepita is the Spanish term for hulled pumpkin seeds.  You’ll find them packaged at Trader Joe’s.  Be sure to toast extra—they make a nutritious and addictive snack.

2 thoughts on “Apple and Celery Salad with Toasted Seeds”