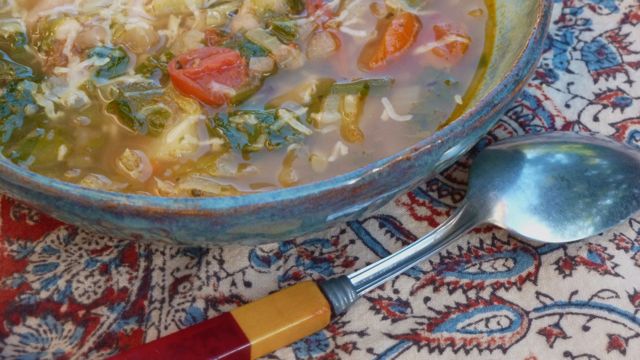 We often chat about random topics in the car—ballot propositions, hurricanes and Spanish verb conjugations.  Sometimes it’s the science of electric circuits, or what’s for dinner.  Burning questions of the day.  You know what I mean, if you hang around kids much.

How about cooking escarole tonight?, I ask.  Esca-what?  You mean snails?!  Yuck.  No, not escargot!  It’s something rolled, right?  Give me your iPhone Mom; I’ll look it up.  I love the teachable moments we still share in the car.  And in the kitchen.  With teens, the opportunities are fleeting and attention spans short.  We need a galvanizing force, like a presidential election or a head of unusual lettuce.

I’d actually been thinking about escarole even before the conversation in the car—late one night, as I flipped pages in bed.  My favorite bedside reading consists of a teetering pile of cookbooks borrowed from the library, plastered with enticing photographs and potent fuel for sweet dreams.  The Bocca Cookbook for instance.

A recipe for braised escarole catches my eye with its charming headnote about a gray-haired Sicilian grandma (an expert cook like all Italian grandmas seem to be).  An enormous head of escarole is lovingly stuffed with anchovies, raisins and garlic by two petite, weathered hands.  Then trussed carefully with kitchen twine, lowered into an ancient cast-iron pot and gently braised until tender and brown.  The whole package bathes in its self-made, fruit-infused sauce.  I smile as I turn out the light.  And sure enough the next morning I can’t shake the image of braised escarole.  Luckily just a short car ride a few days later, a simple question posed, and we’re in business.

The girls and I don’t worry about authenticity much.  We’re short on string for starters, so we leave that flourish to Nonna.  After all, this is OUR experiment.  And we’re not Sicilian or experts.  We skip the trussing (and anchovies), and toss the ingredients into our version of the ancient pot. 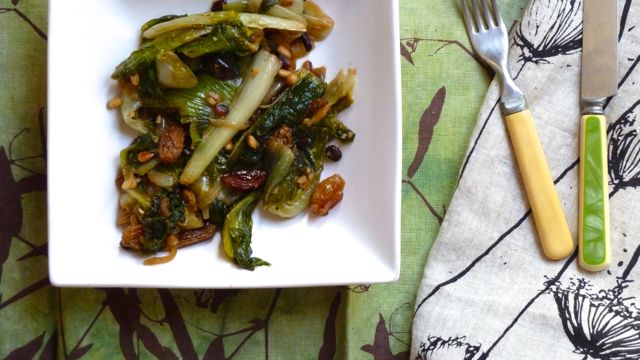 The results are tasty.  And easy.  Next thing I know we’re dabbling with escarole in other ways too.  Soup, of course, since it’s perfect for fall, as well as being a classic treatment.  The potful will feed us for at least two meals, and any leftovers are frozen for later lunchbox fare.  (Note:  click on words and phrases in blue for links to recipes.) 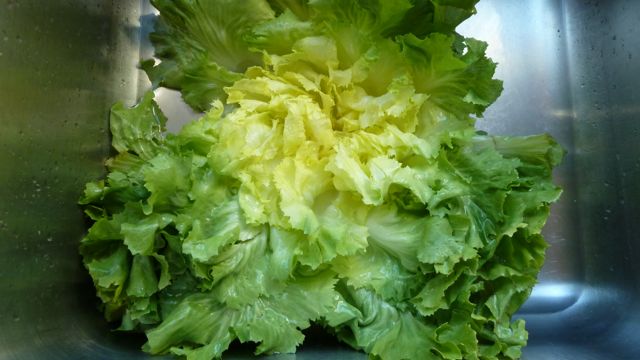 A head of escarole is a flamboyant sight—like an enormous ruffled carnation with a surprisingly chartreuse core.  It thrives in California winter temperatures, so we’ll see more in the months to come.  This member of the chicory family is a cousin of other strongly flavored leaves like radicchio and endive—leaves with character, some adoringly argue. 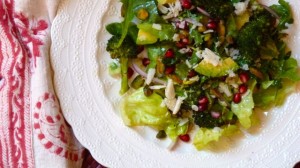 Others are blunt in their assessment.  Bitter, they counter.  But bitter can be just right, when tossed with assertive partners like mustardy vinaigrette, tart pomegranate seeds and aged cheese for a spunky salad sure to shake up any possibility of dinner doldrums.

The mildest inner leaves are the best choice for salad.  Reserve the outer ones for cooking which brings out their natural flavor, braised as a Sicilian nonna would suggest or simply sautéed with lots of minced garlic and red pepper flakes.  Toss with pasta and grated Parmesan or fold into cooked chickpeas (another Italian classic).  Either way packs bone-supporting Vitamin K plus a healthy dose of Vitamin A and folate.

Thank you escarole, for bringing us together to experiment in the kitchen once again.

Other ideas for this week’s bag:

The first beets we’ve received in a long while whisper “beet cake” in our ears.

Cauliflower equates to Indian Aloo Gobi (potatoes and cauliflower) in this household—maybe our roasted version for a change.  We cut cauliflower, onion and potatoes into cubes, lay out on separate baking sheets and toss with a bit of olive oil and ground cumin, ground coriander (roughly three times the coriander to cumin) a large pinch of turmeric and plenty of salt.  If we have some garam masala we add a pinch or two of that as well.  Into a preheated 400 degree oven the vegetables go until they are tender (each will take a different amount of time), turning each once or twice during cooking.  Toss all three together in a bowl and garnish with chopped cilantro.

Chop kale very finely and toss with cooked grains—for instance quinoa, farro or bulgur wheat.  Season with salt and pepper and top with roasted beets and cubes of feta cheese.  Drizzle with balsamic vinaigrette.  A bit of chopped parsley too.

Juice the carrots or create an easy Indian-inspired stir-fry.  Pair with the aloo gobi for a complete meal.