With its long, sun-filled days and warm temperatures, one of the great pleasures of late summer is the pepper and tomato explosion ignited in the garden.  Both are members of the sun-loving nightshade family, as are other favorites—potatoes, chiles and 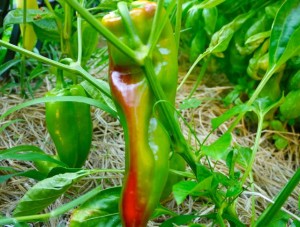 eggplants among them.  In case you’re wondering, that’s the same family that claims more infamous brethren as well:  tobacco and deadly nightshade.  Though the edible nightshades contain the same alkaloid compounds that render their cousins toxic, in the amounts we regularly consume, peppers, tomatoes, potatoes and eggplants (any nightshades we find in the farm share) are entirely safe.  And considering the beneficial nutrients they contain, these beauties are healthy choices on an August dinner plate.  Our favorite red ones are loaded with dietary fiber, potassium, A, B and C vitamins, and antioxidant lycopene, known for its heart health and cancer fighting properties. 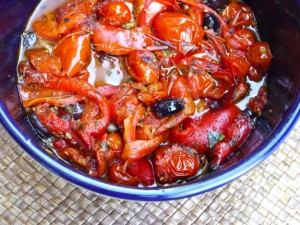 It’s tough to imagine life in the kitchen without the assistance of peppers and tomatoes.  These cousins are the building blocks to a wealth of culinary possibility from across the globe.  Roasted, grilled, stir-fried or raw.  Stuffed or not.  In salads, crostini, tacos, curries and tagines.  Paired with cheeses, corn, rice and whole grains, beans, olives and their oil, green herbs of all sorts,  vinegar, lemon and nightshade relatives.

Among our favorite approaches is to fire up the oven on a cool evening—or the grill on a scorcher—and roast up a batch of pepper strips.  The heat concentrates the flavors and creates a moist, supple texture beneath the skins.  Add a few tomatoes for sweetness and acidity and chopped herbs and olives for flavor.  For the simplest supper, spread a layer of creamy fresh ricotta or goat cheese over toasted bread and top with a spoonful of the fragrant scarlet mix (juice and all) plus a squeeze of lemon and a sprinkling of salt.  Or on a lazy day, simply scoop the mixture, gluten-free, from the bowl, stirring a casual dollop of cheese right in.  This is summer eating at its best, simple and fresh, yet loaded with flavor—all thanks to an abundance of nightshades.  The less shady ones.

Oh, and though we love our nightshades, one bit of advice, if you’ve ever noticed a greenish layer under the skin of a potato, peel it off.  That green flesh contains alkaloids which though they won’t harm us in such small amounts, do pose the possibility of a stomach ache we’d rather avoid.  It’s always best to store potatoes in a dark, cool environment that discourages alkaloid production and sprouting.