This versatile salad features winter broccoli and oranges. The rest is up to you. Add in tender or crunchy lettuces or other leaves like spinach, peppery arugula or vibrant red cabbage (pictured above). Roughly chopped herbs are wonderful in this mix — mint, cilantro, dill, parsley. Try some feathery fennel fronds (or shaved bulb). If you can get your hands on a few edible flowers like calendula or broccoli add them at the very last minute before serving. This salad is crunchy, bold and slightly sweet — a colorful mound of pleasure for the eyes as well as the palate.

END_OF_DOCUMENT_TOKEN_TO_BE_REPLACED

Manchego is a sheep’s milk cheese from Spain – buttery textured, though firm, with a distinctive, mild flavor.  If you are unable to locate it, try using Pecorino Romano, or domestic Parmesan (not imported which is harder) in its place.  Some radishes can be pungent, even overwhelmingly so, in large amounts.  Grating them into small strips using a standard box grater (largest size holes) allows each forkful of salad to find just the right balance of flavor and texture – spicy radish; soft, mellow cheese; crisp lettuce; and mustardy vinaigrette.  You might also consider adding some chopped pecans like I did the other night.

Toss lettuce, radish and onion with enough mustard vinaigrette to coat.  Refrigerate remaining vinaigrette for later use.  Serve with shaved Manchego Cheese on top and nuts, if desired. 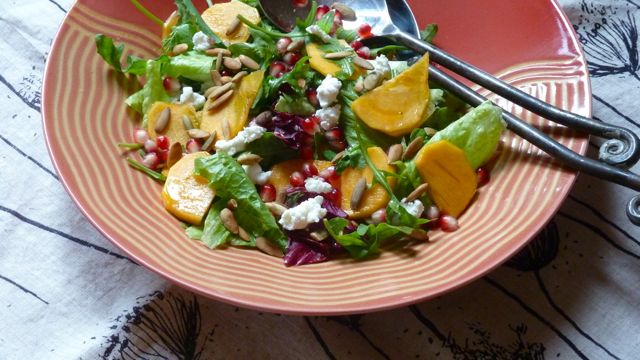 Make sure you select Fuyu persimmons for this salad—they are sweet when firm, unlike their cousins, the Hachiyas, which are ripe when their flesh is as soft as jelly. If you are unable to find persimmon, substitute pear or apple.

END_OF_DOCUMENT_TOKEN_TO_BE_REPLACED

This is a lovely seasonal salad to enjoy when the end of the fig season coincides with the beginning of the apple harvest.  I serve it dressed with a vinaigrette made with apple cider vinegar, but use any type of vinaigrette you have on hand, homemade or not.  Instead of using toasted nuts you might substitute sweet or spiced nuts— you can find them at Trader Joe’s.

END_OF_DOCUMENT_TOKEN_TO_BE_REPLACED

How spoiled we are to find all the ingredients for this salad locally, including in our backyards.  Raised in Illinois, after 17 years in the SF Bay Area, I am still struck by the exotic sight of citrus trees growing right outside my door.

Our farm box delivery provided the lettuce – the nuts, avocado, radish, onion and vinaigrette ingredients all came from the local farmers’ market.  We still have a few juicy oranges hanging onto our backyard trees, so sweet they are practically bursting.  If it were fall, we’d be harvesting walnuts from the yard as well!

END_OF_DOCUMENT_TOKEN_TO_BE_REPLACED

Freshness Farms is a community of subscribers dedicated to celebrating and supporting local, seasonal food. Each week we share recipes and ideas focused on the current delivery and encourage anyone interested to share as well. Find our contact information on the Freshness Farms page.