We love a mystery. Preferably with a trail of clues, a touch of suspense and opportunities to toss our who-done-it theories around at the dinner table like amateur sleuths. This journal has chronicled such before—tales of monster zucchinis, mystery vines and compost packages. It’s been a while though, so when our youngest decided to clean her room recently it was only fitting that a puzzle emerge—along with a mountain of dirty socks.

Mom, there’s an envelope with your name on it in my old school stuff. She waved an ordinary business-size white envelope at me—my name was pencilled neatly across the top, in large letters. I took a closer look. The first letter of each word was carefully shaped in oversized block print, like the opening text in a cloth-bound children’s book from an earlier era. There was a touch of flourish to the style. These were not the scribblings of a hasty grocery list. My name had been wrought—with artistry and feeling. Generosity.

How long this unassuming package had waited, tucked in a pile of abandoned papers (and dirty socks), one can only guess. Our child isn’t known as a cleaner, so it might have been a year, perhaps five. I hate to contemplate more. She had no memory of sender or envelope. For all she knew it had been planted in her room and never actually entrusted to her at all (her theory). Questioning led nowhere. I turned to the physical evidence instead—more promising than a distracted teenage witness.

Besides my handwritten name there was a smaller note, scrawled in a haphazard fashion at the bottom of the envelope, as if as an afterthought:  “sorry, oops, tea drop”.  An arrow pointed to a faint brownish splotch. A tea drinker, I thought, with a smile. A polite one. And apparently fastidious as well. I know gangs of tea drinkers (it’s an obsession among my friends), but the handwriting rang no bells. 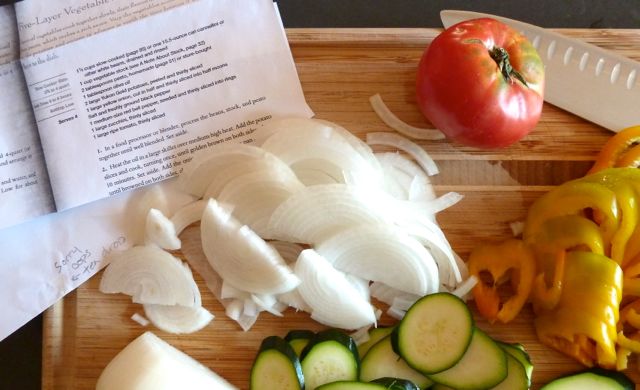 I eagerly broke the envelope’s seal. Folded neatly into thirds inside was a photocopied recipe from a cookbook, nothing more.  The recipe for “Five-Layer Vegetable Strata with Pesto” was vegetarian, suggesting knowledge of our dietary habits—though it called for a crockpot, an appliance I’ve never owned or entertained an interest in. A friend would know that. Though maybe not. At the bottom of the recipe was a message, in one, brief word:  “enjoy”. The tail of the “y” extended in an arc of implied feeling. ENJOY!, it seemed to insist. I pictured the intention in each syllable, if not the writer. There wasn’t much here to go by.

I hurled questions at my cleaning girl—surely some residual scrap lingered in her memory. Don’t you recognize the handwriting? Could it be from a teacher at school? A parent of a friend? Mom! I don’t remember. Are you sure? Think for a minute! All she could offer was a shrug of teenage shoulders as she turned her skinny-jeaned legs, and shut the door. And how could I stop her, even if I wanted more? This young gift horse wouldn’t be cleaning for long—how could I look her in the mouth, so to speak? I’d have to settle for a clean room, if not answers.

Perhaps one of you reading this can shed more light. If not try the vegetable casserole, adapted from a photocopied page from an unknown cookbook—a gift from a generous, albeit anonymous cook (or at least the owner of a cookbook). The last of summer’s vegetables are sautéed then layered one on top of another with thick white bean and pesto purée nestled between, like a carefully made bed. With our strata hot from the oven on a cool evening we toast our benefactor—between creamy bites. We admit our minds are still reexamining the few meager clues, hoping for a breakthrough, even as we chew.

A mystery in tasty layers:  we relish every bite. And silently usher a belated “thank you” out to the universe. And a certain someone. You know who you are… 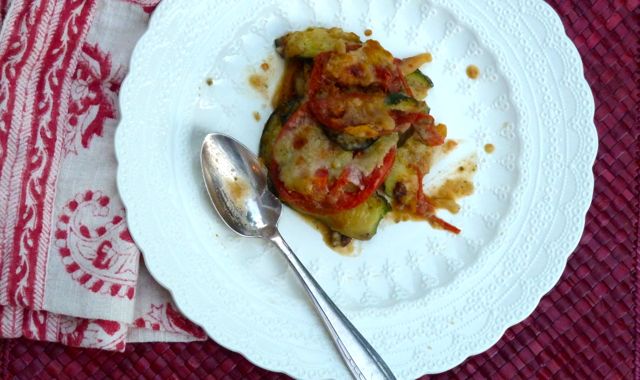 This dish was named a strata by the unknown author of the mystery cookbook. A strata, to my mind is a savory (and eggy) bread pudding, often eaten for brunch. If I were naming, I would call this a gratin, with its vegetable layers and creamy white bean and pesto-based sauce. The combination is simple, yet inspired. And luxurious on the tongue.

The original instructions called for cooking in a crockpot, an appliance I have yet to buy, so we’ve refashioned the instructions to use the oven. Our results were heavenly. Only our benefactor can comment on the slow-cooked version. To add flavor, and help the cooking along (since we baked ours for a mere hour, compared to the 6-8 called for in the original) we sautéed our vegetables on the stove first until they achieved a flavor-flecked, golden brown. Then we layered them carefully in a 6 by 10 inch glass Pyrex dish (a 8 or 9 inch square one would work as well).

Quick Tips for this Week’s Delivery:

Shred carrots and toss with a mustard-based vinaigrette plus spinach and arugula leaves. Toss in a bit of grated onion for punch. Perhaps a few pomegranate seeds.

Roast cubed potatoes, onions and carrots (tossed with a bit of olive oil) at 400 degrees until tender (30 minutes). Season with salt and pepper.  If you have a few herb sprigs—thyme or rosemary—add them to the pan.