This time of year – early August – brings my family together. From both ends of the country and parts in between, we travel to a tiny town in Northern Indiana, nestled beside a picturesque lake. We gather in a house built at the turn of the last century, which has remained over those many years, more or less, as it started – a modest lakeside cottage. Relics of lives long since passed are harbored here – a Victrola phonograph, fishing poles and tackle, pink Depression glass plates and Wizard of Oz books. It’s a setting saturated with childhood memories – swimming in the lake on hot summer days, chasing fireflies at dusk, lounging with a book on the porch swing, falling asleep to the lullaby of chirping katydids. Photographs line the walls, revealing smiling faces. Some of the images are brown with age – five sisters, the first visitors to this place. Now five generations later, my own family’s smiles grace the dark, unfinished wood, as do those of cousins, aunts and uncles.

On a typical year, we find fifteen family members (plus friends) sleeping wherever they can make room – on blow-up mattresses, the screened-in porch, sometimes a tent pitched on the front lawn. When our girls were younger they would sleep together with a favorite cousin, three girls in a bunk bed made for two, crammed into a tiny room just big enough to add a couple of suitcases. Sometimes it feels a bit squeezed – but this is how it is, has always been and how we like it. 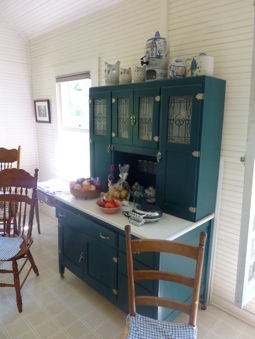 At the cottage everything is communal, and nowhere is this more evident than when it comes to meals. We cook together, each and every day. A typical scenario begins with a group sitting on the dock by the lake – a sister, brother, nephew, friend asks “what’ll we make for dinner tonight?” From there a plan evolves. The passing years have seen us whip up some amazing meals with all sorts of ingredients – mostly local since that’s how it works in these parts. The one given for any dinner, the menu element we count on – just-picked, beautifully shiny, yellow Indiana sweet corn. The best anywhere in the world – though I admit, I could be biased.

To find the corn we pile into the car and drive down country roads – past corn fields (we’re on the right track), a couple of farmhouses, a horse here or there, and not much else. When we get to PJ’s Bar and Grill we’re almost there – another field of corn or beans, maybe two. No need for a GPS, we see our destination on the left – Yellow River Farms. Count on finding the same basic types of produce here pretty much any summer day – it’s been that way for years. If you ask for cilantro, you’re likely to get a puzzled look. Change isn’t highly valued in this neck of the woods.

We load up: two dozen just-picked ears, a ripe muskmelon or two, maybe some green beans if they look good or Michigan peaches. It isn’t until later in the month that the local tomatoes are ready, a treat worth coming back for if we didn’t live so far away. But for now, at least we can count on having corn!